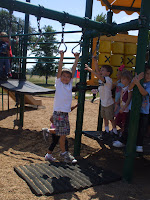 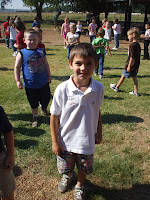 Yes, there were some tears (mostly from me), but WE MADE IT!I admit that I did "sneak out" from Jace's room this morning, which you are never suppose to do, but hey, I was about to have a meltdown as it was without having to hear him cry. I never heard him, thank goodness, but as soon as I got back in the truck I broke down. I know, I wasn't the best example in front of Kylan, but I was sad and couldn't contain myself. I called later to check on him and they said he did great. He only cried later when another child came in crying. They said that he calmed down and was having a fabulous time on the playground. My mom picked him up at 11,so he wouldn't have to stay a full day, and John's mom is picking him up around lunch tomorrow, so that helps me not feel as bad leaving him. Kylan did FANTASTIC! I ate lunch with him, which he says we must do everyday, lol! He even got an "Awesome" and "Good listener" on his two coloring pages that he did today. His teacher is really good, so I'm excited. She was telling me how bright Kylan was, and that he was recognizing names that she didn't expect. That of course, made my day. She did tell me he likes to talk, hmmmm, wonder where he gets that from, lol! I talked to him about it at lunch and I think he did better after that. As of my day and class, I had no crying kiddos, which was great! I expected a few, and some teared up once or twice, but I was super proud of them. As of now I have 14 students, which is GREAT! It's crazy how we forget what these little ones start out not knowing. I don't just mean academics,I mean rules and social behavior as well. This really is a rewarding grade and so many people don't realize that these kids start out not knowing a single letter or sound of the alphabet, but are reading, writing, and spelling by the end of Kindergarten. Anyway, enough of my ranting....if you said a prayer for us today, THANK YOU! It worked! So, in saying that..please say another one tomorrow, and the day after that, and the day after that....You get the picture!

14 kids, that is an awesome class! That should make for a fun year!!!

I am so glad that Jace had a great day and didn't cry much!!! Bless his little heart- and yours too!

How sweet is it that you got to eat with Kylan and that he wants you to do that every day!!! Emma didn't even want me to walk her to her class :(

So glad there weren't any tears. I actually had a few today from two little girls! I think sometimes that second day is harder for them becuase they start realizing it wasn't just a one day thing! Hope the rest of the year goes well!

I'm so happy to hear that all went well. THE POWER OF PRAYER AMAZES ME! I knew you could do it! No one told me that it was against parenting rules to sneak off. I've been doing that my whole motherhood career. (All of 33 months)lol