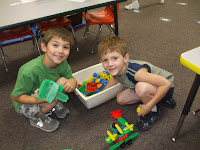 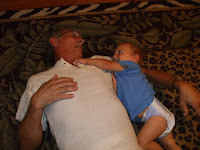 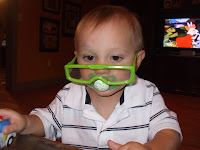 Jace is 15 months old today!
Some of his favorite things:
He loves to dance, and LOVES his Wheels on the Bus book. (We have read it 3 times already tonight.) He also LOVES his bath. As soon as you say do you want to take a bath he heads straight to the tub. He has apparantly learned how to point to his head today, b/c anytime you ask where his head is,he smacks himself on his head. He also points to his noise(or sticks his finger in it) when you ask where his eyes are. He will also actually point to his eyes too. I guess b/c they have that same ending sound. He will also go and pull on the refrigerator door when he wants his milk, and loves to play chase and peek a boo. He still loves his paci, and will take one out of his mouth if he sees another one to replace it. Heloves to push buttons, play with cell phones,and still prefers to hide behind the dining room table to poop. He is a fabulous eater. He eats breakfast at home and again at school along with lunch and a snack. Then it is home for another snack, supper, and the bedtime snack. I only wish that I could eat like that! I can't believe how fast my sweet angel is growing!

He spent his day by going to daycare ALL DAY! They said he did a great job. Bless his heart though, I snuck in to pick him up and he was fine and playing well. As soon as I said his name he got so emotional. He came running to me and started crying. I just imagine in his little head he was saying, "It's about time mommy, where have you been and why did you leave me all day?" I was planning to leave him all day again tomorrow, but my mom said she would be in town and would pick him up early. It was a wild day at school. I had recess duty, which always makes for a different schedule day. I had one that got upset when I left for less then 5 minutes when I had to go talk to an insurance rep and then another that got upset when she fell in PE. After that, though, it seemed to go pretty well. I am just ready for more of a routine, which will thankfully start next week when we start out reading and math and they go to their activity classes. Kylan was excited that he got to come play in my room during inside recess. His class is at the other end of the hall so they split up into the four other Kindergarten rooms to play so the duty teacher can keep a good eye on all of the kids. I got a cute pic. of him and his buddy from daycare last year. Since we have been home, I got two loads of laundry done and cooked supper for us and two dishes for our extension club's rice buffet that we do to raise money. John went to church while the boys and I hung around the house exhausted from yet another busy day. My parents came over to visit with the boys a few minutes after church. Now, it's off to prepare for tomorrow....ironing clothes,etc.

Do you ever sleep!? :)
You need a video of Jace smacking his head, how funny!