Back to school blues 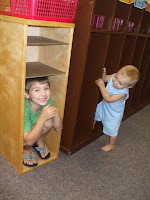 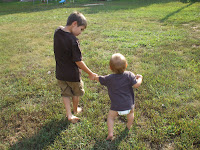 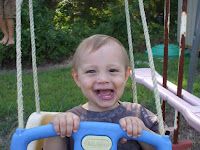 Okay, so I'm really sad that school starts next week. Not because I don't like my job, or because I'm not thankful for the routine, but because Jace will be going back to daycare. He is going to cry, and cry, and cry. That BREAKS my heart into a thousand tiny pieces. I have tried not to think about it, but after this weekend it is OVER! No more being lazy and playing with him all day. He will have good teachers and a cool new playground at daycare, but it is just not the same as me having him. I hope that I just don't come in Monday morning boo-hooing from leaving him. It is a good thing that Kylan will be coming to school with me, so that MAYBE I can keep my mind on school. So many have asked if I will cry because Kylan is starting Kindergarten, but it doesn't upset me at all. He will be with me at my school. I can basically check on him at any time and I know he is going to be fine. He still says he is not ready to start though, and has had some tears of his own about going. I think though that once he gets used to the structure and routine that he will be just fine. This week has been full of inservice hours and spending as much time as possible with my boys. I did however go out to dinner with the women of our club for our annual Aug. outing last night. Other than that the boys and I have been trying to get some outside play in a little everyday. Today I picked them up from John's mom's house and brought them back to school where I worked until almost 5. Tomorrow we have Kindergarten orientation and open house tomorrow night. I think that Andrea is going to pick Kylan up from my mom in laws and take him so that he can show her around the school, since I can't leave my room to take him around. But atleast after tomorrow I have Fri. off and then the weekend. Goodbye summer! I'm going to miss you!

I empathized with you while reading this post. My empathy and what you get from fellow teachers is probably it. At least, I never get any sympathy from people who work year-round. (My sister) Anyway, I'll say an extra prayer for you all the next few nights. I sure hope the transition back to reality happens smoothly and with as few tears as possible. I know I'm lucky in that Emma is at my school and that I leave her with Chandra every day. It doesn't get any better than that...
LOVED THE PICTURES! :) Enjoy your weekend!

I can't believe school is starting already! Up here in VA they are still going strong with summer--school starts after Labor Day!
I hope Jace won't cry and he'll adjust okay!! good luck!