My adventure with Stacy 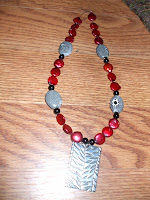 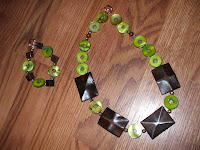 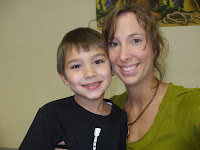 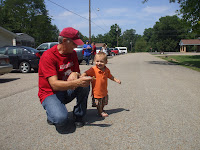 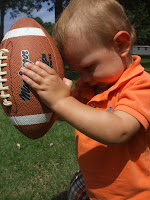 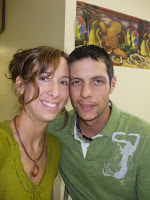 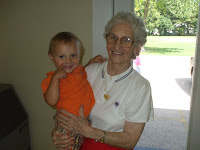 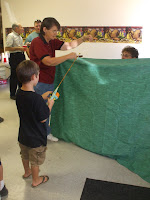 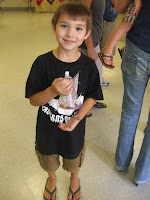 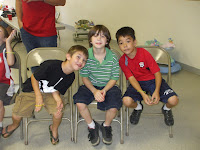 Okay, so if you want to have an interesting day, you defiantly need to have Stacy with you. My day started off rather normally. John let me sleep in a little while he watched the kids. We then got up and around and headed to our family reunion. It was strange since this is the first one without my grandpa. It was still nice to see everyone. Kylan had a great time playing with all of the other kids. They even had a fishing game set up for them to get a prize. On the way home from the reunion, Stacy called and wanted to know if I want to head to town with her and Susan (who is from China, and is in the US to teach Chinese at our school.) I said sure, sounds like fun. I picked up Susan at her apartment and we headed to Stacy's house. There we got to meet their brand new addition to the family....a sweet little puppy named Honey that they adopted. After that, off we went to Pattycakes first and I got 2 more pair of shoes for Jace and a shirt for Kylan. I got Jace those cute and annoying squeaker shoes. He LOVES them! We then headed to KFC because Susan didn't eat lunch and was starving. After we ordered her food, we drove around to pay when we were informed that their electricity was out, along with the whole strip that KFC was located. We thought it was a little strange, but decided to head to Hobby Lobby. On the way there we felt a jerk and realized that we had been rear ended. No big deal, since there was no apparent damage that we could detect, but still a little scary. Once at Hobby Lobby, we ran into a friend of Stacy's who told us that the whole town had no electricity. So, imagine, no lights, no shopping, possibly could have been total chaos. We then decided to ride around a little while in hopes that the power would come back on and we could finish shopping. My mom then proceeds to call to see if I was still in town. My dad had gone and was literally, under empty with his gas light. Of course with no power, there was no getting gas. No way to use the pumps or to pay. Dad wasn't sure what to do. Luckily, as we were riding around, we noticed that one small section had regained power so I called him and told him of a gas station that he could hopefully make it there. Us girls went next door and got ice cream while we waited on the rest of the city to regain power. Lucky us, we got free ice cream because the registers were still not able to connect to their servers. It was YUMMY! Dad made it fine and headed home and we headed to Walmart to get some groceries with Susan. They had a generator, thank goodness. I can't even begin to fathom the nightmare it would have been in there without electricity. By the time we finished in there Hobby Lobby was taking customers again so we all got lots of beads and things to make us some jewelry. I spent way too much money tonight, was in a very minor wreck, and in a city with no power. Hmmmm, I may be rethinking my adventures with Stacy, lol! We had a GREAT time, regardless of all of the circumstances. It makes for interesting conversation anyway. I got home and John and I watched a movie and I made some jewlery. Let me know what you think Stacy!

What can I say? Never a dull moment! You did a GREAT JOB on your jewelry! I told you you could do it! Great, I have created another beading monster!

Thanks! I am already eyeing those beads in today's Hobby Lobby ad, lol! I do still have to finish the top necklace. I forgot to get silver clasps.

cute jewelry. I too, have never endured a dull moment with Stacy! Even running into her in a parking lot (not with vehicles, ha) always provides at least a couple of laughs! She is great! We also took advantage of the wondrous sale at PAtty Cakes :) fun, fun!

hey! found your blog thru Ashley Smith's. I guess I'm the only one that doesn't have a family page. You'll have to show me how to set it up... too old! And the jewelry too. too cute. enjoy our day off!! Monica