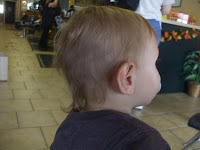 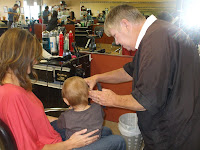 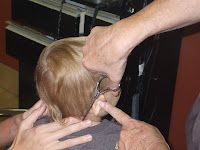 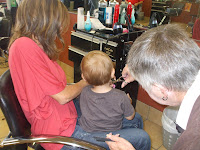 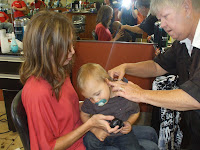 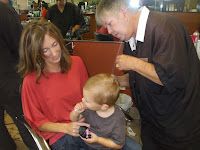 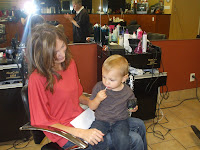 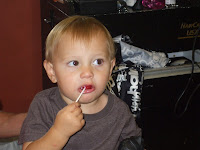 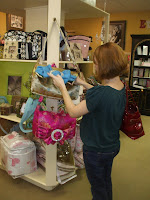 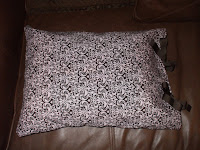 Yes, Jace is almost 17 months old and is just now getting his first haircut. Partly because he doesn't have much to cut, and mostly because I feel like he is not such a baby anymore with his haircut. The rat tail though, had to go. Tiffany went with me and was sweet to take pictures since I was holding him and couldn't. Jace didn't care for the cut and was hard to keep still, but he never cried. I didn't have them cut anything off of the front except for his sideburns. The back was the target area. It honestly took between 5-8 minutes to cut, if that long. Afterwards Tiff. and I went to get her registered at Pattycakes and Target. It is always fun to register for baby stuff. Jace go a little cranky, but was pretty good for the most part. I believe that John and Kylan went fishing while we were gone, but not sure, seeing as they are still outside. Well, off to bed for the night, or maybe to read a little first....Oh, I am also posting a picture of a pillow case that I made for a little girl. I have never made one before but was asked, so I thought I would give it a try. I thought it turned out pretty cute. I am also posting a video of Jace. Last night he would walk around like a little drunk man and fall down on purpose and say "Whoa." It was soooo funny. Unfortunately, he wouldn't do it for me today when I started videoing, but the video is still cute enough to post.

Aw! What is it about a haircut that makes them little boys instead of babies?! He's so sweet!

AWE... I am sure he looks like a big kid noW! Time to have another one :) So glad you and Tiff had a fun day. I miss you guys! I will be home Wednesday! The pillowcase turned out great!

We miss you too Stac!