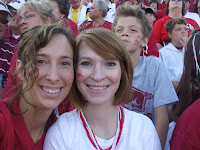 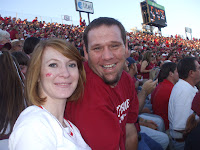 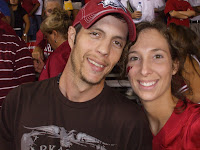 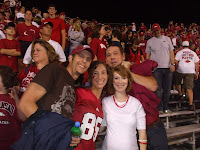 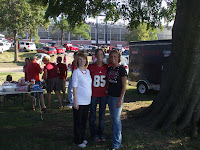 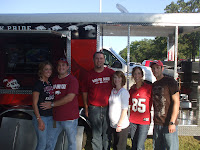 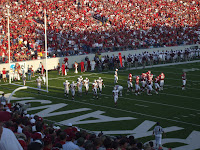 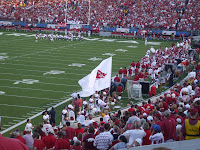 We had an AWESOME day today! (Well, except for John getting sick.) Tiff and Jeff were lucky enough to get us all razorback tickets for the game in Little Rock tonight. We dropped off Kylan to his Meme's and Jace to Gammy's and off we went. We stopped at one baby store on the way to look at cribs for Tiff, and then it was off to the game. As soon as we got parked, John felt TERRIBLE! He has really bad nerves, and for some reason they hit him tonight. We walked to a Backyard Burger and ate, while John puked behind the fence. (Way away from us, thank goodness.) We then walked on to the stadium to find Andrea and Mackey, who had been tailgating all day. We visited with them for a little bit before heading into the game. John ended up getting up and sitting near the exit until almost halftime, poor thing. Even though I have to admit, I was at the razorback game, I didn't have much time for sympathy, lol! He finally started feeling better, though we all felt sick (because of the score.) They finally pepped up and it ended up being a pretty nail-biting, edge of your seat game, with us only winning by 1 point. Hey, a win is a win though, right? After the game we went back out to Andrea and Mackey's tailgating spot and visited very briefly before heading home. We had such a great time! Thanks for the invite Tiff and Jeff!!!

Glad you had a fun day. Yuck that John was sick- poor guy! Is the crib dilema finally settled?

Brett is so jealous you went to the game. Too bad John was sick, no fun.
I'm excited for football season!

The crib drama is settled....she ordered the one from JcPenny. I LOVE IT!!!

Drama? What drama? LOL Now it's on to bedding! LOOK OUT!

I can't wait to help you with the bedding Tiff!

OK so let me get this right. the red head is suppose to be pregnant??? someone feed her a cheesburger!!! i swear i hate cute pregnant people!!! i don't know how you, tiffany, and stac, look so cute pregnant and i looked like a flippin cow!!!! i guess i can't have brains and beauty haha crib drama?? wait til the name drama....me and blake literally didn't decided on a middle name until the day before, now that is drama!! he couldn't make up his mind!!

You are too funny Linz. You did not look like a cow. I think they need to just do a coin toss on the name. They do have it narrowed down to two choice!!!!