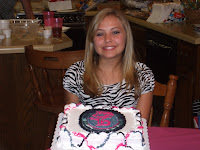 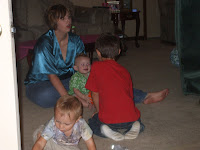 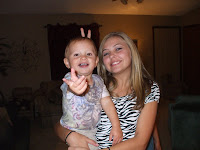 My sweet niece Hillary (the oldest of the Sutton grandchildren) turned 16 today! The family surprised her for her birthday by being at her house when she got in from cheerleading practice. HAPPY BIRTHDAY!!!

I have to blog about two funny things that Kylan said today, just so I don't forget them when I am old and gray, ha! This morning he was getting dressed and pointing out body parts for some reason. And no, this isn't going to be a x-rated blog, lol! He was showing me his spine,shoulders, etc. He then pointed to his elbow and said, "This is my magic bone, right momma?" I said, What?" He then pointed again and said, "Where is my magic bone?" I realized that he was speaking of his funny bone and asked him if that was what he was talking about. He said, "Oh, yeah, my funny bone. Do I have a magic bone?" I thought it was the funniest thing. Then this afternoon on the way home from school he just bursted out laughing. I asked him what was so funny and he said that he went to the bathroom today and realized that his underwear was inside out. I asked him if he laughed when he realized it, and he daid no, he didn't want the other kids to figure it out, ha! I asked him if he was embarressed and he said a little. Isn't it funny though what kids come up with?

Too funny! Magic Bone....
Your neice is such a cutie pie. I had a surprise birthday party on my 16th too! My boyfriend took me out to eat dinner and we walked in and there was a huge banner that said "Happy Birthday" and I said "Oh, it's someone else's birthday too!" what a ditz! All of my fam and friends were there.