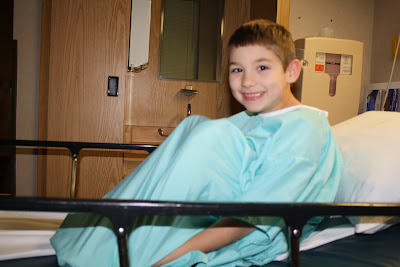 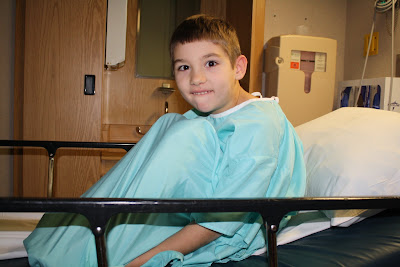 Kylan had his surgery this morning for his 4th set of tubes for his ears. We had to be there at 5:30 this morning with his surgery scheduled for 7:30. We got up at 4:15 to head out & get to the hospital in time. At least the traffic wasn't bad that early, lol. It was after midnight before Kylan went to sleep last night b/c he was so nervous. Bless his heart. They gave him the "goofy juice" which isn't pleasant once it starts to take effect. Poor kid is like a sad drunk. He just cries and cries with it. This time was even worse though, he kept wanting to sit up and then he would fall over and I would have to keep him from hitting the floor or the side of his bed. He would then get so mad at me for making him lay down. He was very moody and hateful to be honest, but I know it was the medicine. He did great during surgery and then came recovery. It was really bad getting him calm then. He was mad b/c he was dizzy and everything was so loud and then he would cry. The medicine finally started wearing off and we got to go home. He is now back to his normal self and can hopefully pass his hearing tests now! We go back in 2 weeks for a re-test. We shall see! I am just so thankful that the good Lord has his hands on my sweet boy today and that this is over for now. Hopefully it will be his last set, though they thought that the last time!

Poor guy! I'm glad it's over and you guys can enjoy Christmas with all that behind you!