What life has consisted of since Christmas..... 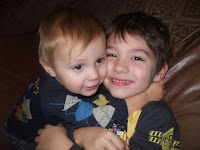 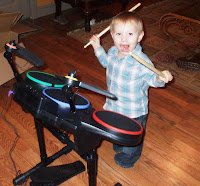 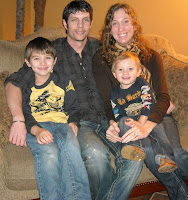 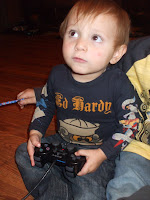 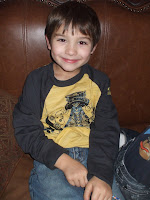 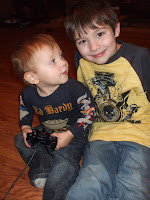 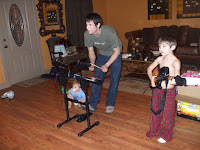 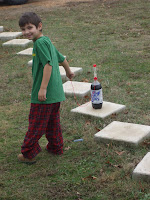 We, ummmm, I mean the boys are really enjoying their rock band. It is sooo much fun. Seriously, I thought everyone was just being a little dramatic when they said how addictive it was. But now, I understand. I get soooo excited to just get through a song without being booed off. Then when I get through a song, then I just want to see how good my percentage was. So far, 97% is the best I have done. Which would be totally awesome, if I wasn't so embarrassed to admit that it is on the "easy" level, lol. I haven't tried the drums yet, I'm a little scared to be honest. Though if I ever did take some kind of lessons, it would so be the drums. Maybe one day, when my kids are grown I can take lessons, and then I would be the cool rocker mom that could jam on the drums. Except that I would only end up embarrassing my kids, and the term "jam on the drums" would probably be nonexistent, if it isn't already. Anyway, just a glimpse of what has been going around here. We did go to church today as usual, oh, and John and I went on a date last night to the movies, which was nice. We saw The day the Earth stood still. In my opinion it wasn't worth it, but we had a gift certificate so, at least we didn't lose money on it. Next time, I get to pick the movie. :) I am posting some pics of the boys playing so sweet together. Oh, and the last pic is of Kylan and his mento's geyser kit that he got for Christmas.

Looks like the boys are in a rock band trance! I've heard it's addictive but haven't tried it myself! I have a feeling if I did I'd get a few "boo's" too!

love the new look of the blog. Love Jace's Dan Harvey t-shirt. Does he know how to play video games or is he just holding the control... because I am thinking kid genious if he does! We too are addicted to Guitar Hero. I totally kick butt (on the Easy level)... you know you are addicted when you play the game when the kids aren't home! We are addicted to Mario cart too.