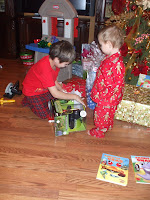 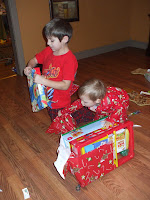 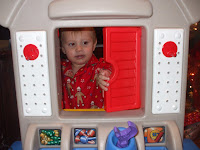 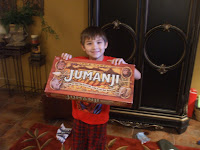 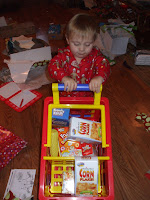 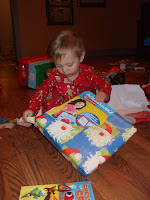 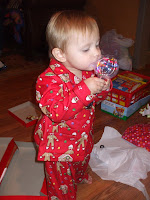 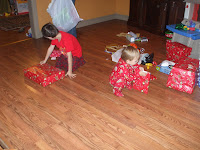 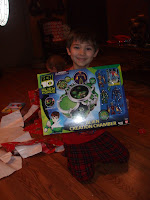 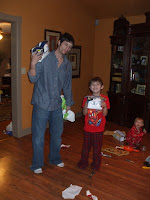 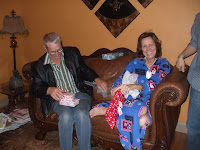 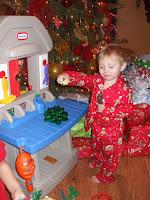 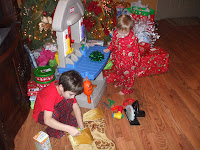 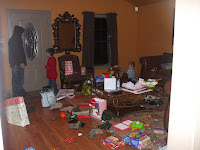 Kylan finally fell asleep around 2 a.m. this morning, which of course made our jobs a lot harder!!! John set his alarm (or at least thought he did) for 5 this morning. Needless to say, it did not go off. I did happen to wake up before 6 and see that the alarm never went off. I nudged John and he got up to finish his "duties" and then came back to bed. Santa must have thought his cookies were delicious because they were all gone this morning. :) I really thought that Kylan would sleep in until at least 8 since he fell asleep so late, but boy was I wrong. At around 6:40 I hear, "Oh my goodness, Look at all of the presents Santa left." Soooooo, he came to wake us up. We did however manage to get him to lay down until, oh, around 6:55. He could no longer stand the anticipation so I let him call Gammy and Papaw to head over. Thank goodness they live next door or I don't think he could have stood to wait. We let the boys open their stocking while my parents came over. The boys had the best time opening presents. I would pay a million dollars to see those expressions all of the time. Kylan got everything on his wish list, which consisted of an alien martian maker, night vision glasses, and guitar hero. He actually did better and got the entire rock band kit with the drums and all. He was actually very appreciative and never said one bad word about anything. We all know that kids are brutally honest, and last night I have to say he was being a bit of a brat with a gift he received early. Now either he took heart to what I said about some kids not getting anything, or he really did enjoy everything he got, but he was good as gold. We have had a busy but fun day. From here we went to my parents, then my grandma Martin's, then to grandma Sanders, and then to John's parents. My kids of course received way to much, but I love how much they are loved, if that makes sense. God had blessed my family with soooo much love and happiness. I can't imagine a better Christmas than we had today. Okay, off here for now, we are about to get our rock band on!!! Merry Christmas to all and thank you all for being such AWESOME friends!!!

2 am???? Seriously! Oh my goodness! My boys were excited too, but they tuckered out about 9:30 on Christmas eve! Our santa would have had to leave a rain check if they stayed up that late!