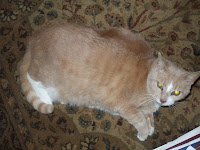 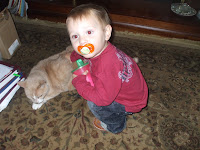 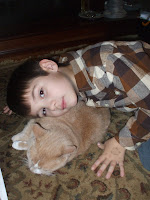 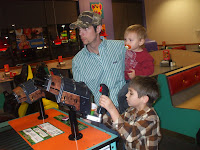 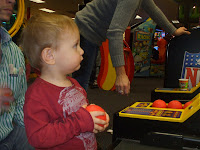 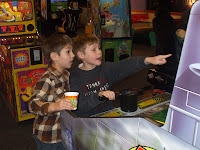 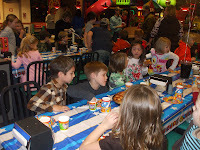 We are enjoying a night home tonight. After Cameron's party Monday night and a Chuck E. Cheese party last night, we are eager to just sit. Kylan went to the birthday party of our neighbors. She also happens to be in my class this year. A super sweet little girl. The kids had loads of fun at her party. Today was a great day at school which is always nice. I hate when my kiddos are sick, but it is nice to have small numbers. I ended up with 10 kids only by 2:30. Four that left were not sick though, so no there is nothing going around in my room, lol. Today was a sad day though. Bandy, my/my parents cat had to be put to sleep. We (my sis and I) got him when we were in the 7th grade. He had been abandoned, hence the name Bandy, and was in terrible shape. My aunt took him home with her to "make him better", or so my parents said. The original plan was for her to take him so that we wouldn't be upset if he didn't live. Well, my aunt spent a fortune and got him back to health and surprised us by bringing him back to us. We have had him ever since. Of course when we started living on our own he stayed with our parents. He had a knot come up above his shoulder and it has continued to get bigger and bigger over 2 months. My dad took him to the vet where they said he had cancer and it was growing very rapidly. He would only have 6 months top, to live. The vet said to keep an eye on him, that he was too old to remove it, and that it would come back anyway. He said that if he stopped eating that he was probably starting to suffer and that it would be a better idea to just put him to sleep. He did stop eating and had started sounding funny, and my parents didn't want to see him suffer. My poor mom has been crying her eyes out all day. Anyway, you might want to send a little prayer for her.

OH. that is so sad about Bandy. Please tell Mrs. Lois how sorry I am for their loss. A pet that has been around that long is like family.

NO NOT BANDY!!!!!! I remeber playing with that cat in yalls club hous!! Do you remember putting diapers on my cat Blackie?? haha I came across those pictures of us doing that when I moved to Oklahoma. RIP Bandy!

Thanks guys for the sweet thoughts, (and memories Lindsey). He was for sure a part of the family. Oh, and yes I do remember dressing up Blackie.....good times, :)

I'm sorry about your family dog! That is so sad, but I bet you guys have some great memories. I have a feeling our family dog won't be around too muc longer either.
Love the pic of the boys in their santa hats btw! They are too cute!

I'm so sorry about Bandy! I know how hard it is to lose a family pet :( I'll most definitely say a prayer for all of you.

Awww. . . I am so sorry, I can't ever remember a time before Bandy! It's always hard to lose a pet! Remember Snoopy, we had her for like 17 years and she died this past year. It doesn't matter how old you get it still hurts the same. I still don't understand how that cat wasn't scared of all those chickens?!?