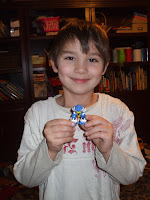 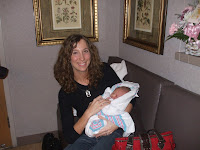 Since I debuted Camilla's wall letters, and now that little one is FINALLY here, I can debut her picture. Stacy and I went to see the sweet new arrival tonight. Poor Tiff, they started inducing around 6 yesterday morning, and after staying dilated to 8 for several long hours, they finally did a C-section, I believe around 10:30 last night. Jeff called me at around 11:40 to let me know. I had told him to call family first of course, and then me no matter what time. I was so excited to get out of bed for that phone call. She weighed 8lbs even, and is cute as a button. She has wonderful color, and she looks like her daddy. I can't wait until I get to hold her again. It was so nice holding a little girl too. Again, not to be redundant all of the time, but MAYBE SOMEDAY!!! Speaking of kids....I was soooo proud of Kylan today. He was proud of himself as well. He counted to 100 all by himself. His teacher was testing some of the kids at nap time and he begged her to let him come up there. She told me that she said, Kylan you already know everything I am testing on, so you don't have to come up here." He convinced her that he could count to 100 and so she said sure. He did and asked if he could get in the treasure box and again she told him to have at it. He has been struggling to count to 100 for quite some time, messing up at 59 and then able to count everything else, with some hesitantly. Today however, was his day! That is all he has talked about. So anyway, I am one proud momma!

Way to go Kylan. Luke is all about the counting too! So glad we could go see that little angel together!.... maybe someday it will be me and Tiff going to see yours!!!

Well I feel for her having a c-section. BUT the second one isn't near as bad, I promise. I didn't take any pain meds til my incision busted open....don't tell her that part. :) Glad they are both doing fine and are healthy.