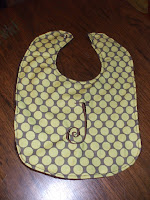 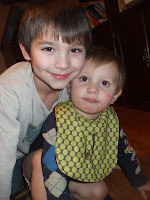 I know, I know....two post in one day, but I had to post a pic of the bib I just made. Jace was asleep and Kylan and John were watching a movie so I decided to dust off the sewing machine. I have been so busy playing on my embroidery machine that I have not done as much sewing. Jace rarely ever wears a bib anymore, but every once in a while he has on a white shirt or one that I just don't want ruined and needs one. Soooo, I decided to make him one since I have given away most of his from his "baby" days. Oh, and by the way, I am aware that Jace's face is completely filthy in the pic, but boys are suppose to be messy right?

cute! I did some sewing today too... since I can't EMBROIDER!

Send me the sight to make my blog header more attractive. Also, I need to place a blanket order.

Very cute! You're so talented!

love the bib! Parker might need one of those! :)

Jessica~ anytime you need something just let me know. Keep checking back too, I am trying out lots of new stuff on my embridery machine and hope to post some pics as I do them.