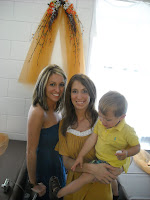 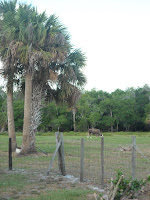 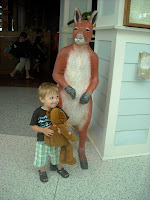 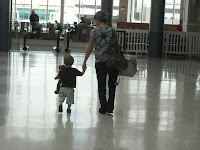 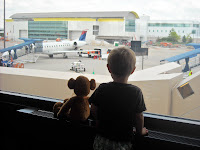 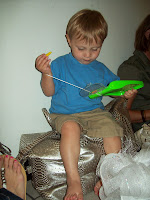 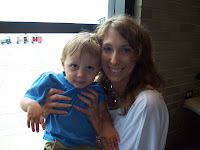 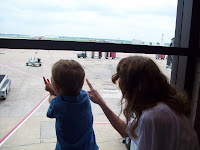 Okay so starting with Thurs. I started feeling ill at school, took my temp, it was 99. By the time I got home it was 101. I took Kylan to his game where John took over and I headed home. My dad came and got Jace so that I could lay down for a little while. Temp was now close to 103. John and Kylan got home from the game (he did awesome, and I hate that I missed it) and we headed to mom and dad's. It was mom's b-day so we had cake & ice cream. Well, they did, I bundled up on the couch away from everyone else. So I'm thinking....great, I am suppose to go to FL tomorrow, what I am I going to do. I took some flu meds and headed to bed early. I woke up the next morning feeling terrible but I wanted to take Kylan to school since I wouldn't see him until Sun. John ended up having to drive but at least I got to go. I took more flu meds but decided that I was still going. We hit the road to the airport. I felt horrible on the plane, but luckily mom and Andrea were seated next to me to help entertain him. He did fabulous thank goodness. We landed in Orlando where we waited 1 1/2 hrs to rent a car. We hit the road and drove 1 1/2 to Okeechobee where the we were headed for the wedding. Technically it was for the reception b/c they were already married in a small family ceremony in Feb. and were having the reception for everyone now. It was the strangest thing seeing cows and palm trees, lol. Basically a lot of this area is for cattle ranches. Anyway we arrived in which Jace was asleep and I was worse. I had to go to bed at Courtnie's mom's house as soon as we arrived. Courtnie being the guest of honor. We finally got back to our hotel and in bed by around 11 or so I think. Silly us...we didn't think about check-out time however. It was at 10. The reception wasn't until 6. We ran to some shops and walmart. I was feeling much better, but still not great. Finally around 2 Courtnie was at her house so we headed there to rest and get ready until the reception at 6. It was a nice reception. We headed out around 10 so that we could drive back to Orlando 1 and 1/2 hrs. away to catch our early flight at 6:55. We finally hit the sack around 1 that morning and then got up at 4:45 to go catch our flight. However, lack of good directions took us to the wrong place to return the rental car. Then once we got there, the promised 5 minute car return, took 15 minutes. Needless to say....we missed our flight by about 5 minutes. Yeah, nice huh? So $50 per person later we got re-routed to Cincinnati. We then waited there for 4 hrs to board to Memphis. And then finally...HOME! Soooo it wasn't the best Mother's Day, but then again...I have healthy, sweet boys.....so any Mother'd Day will be special for that reason! I was so sick this weekend, but it could have been worse. Jace was excellent and I couldn't have asked for a better toddler through the whole ordeal. Oh, and though I haven't eaten a handful since Thurs. I did try a bite of "swamp cabbage" just to say that I tried it. It is the heart of the palm tree. It tasted like....cabbage, lol! I will post the rest of the pictures when I get them from my sis!

I'm so sorry you were sick the whole time! At least Jace was a good traveller! What did he think about the plane?

Yuck, it is not fun traveling when you're sick! South Florida is kind of weird, we have a pasture with cows behind our house but palm trees everywhere too!
You should definitely write the rental car company and complain, they owe you that 50$/person!!

You are such a trooper to go feeling so bad - and taking a toddler with you! haha. I'm glad that he traveled well! Your pictures are sweet!