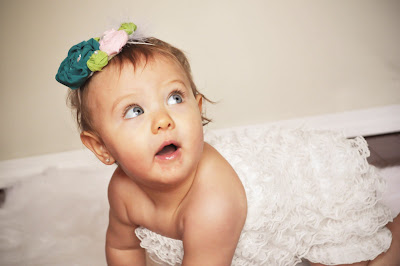 So I have been TERRIBLE about blogging lately.....so here are some updates....Andrea & Mackey lost their house to a fire. :( They are devastated and tired but making it. They stayed at mom & dad's for a few days until they could get moved back into Andrea's old house. Say a prayer for them. God has plans for them!! In other news, Klaire finally has a tooth coming in on the bottom. I can see it, but it has not broken the surface. She is also sleeping in her room, in her crib, now. She got back in bed with us once in the last 7 nights, but still a MAJOR improvement. 3 of those nights she even slept through the night w/o getting up, which is a HUGE ordeal for us!! We had almost forgot what sleep was, lol!! Not much else going on...planning/preparing for the big #1 for Miss Priss. So hard to believe!!!