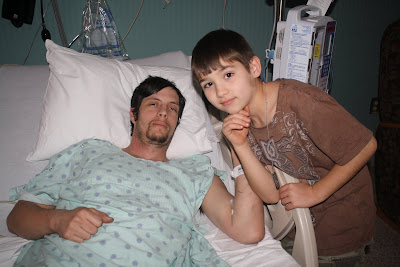 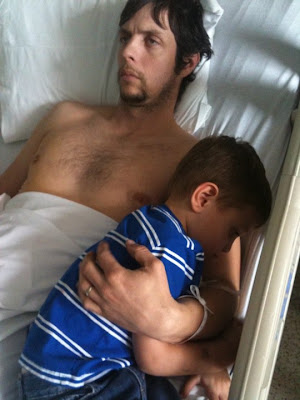 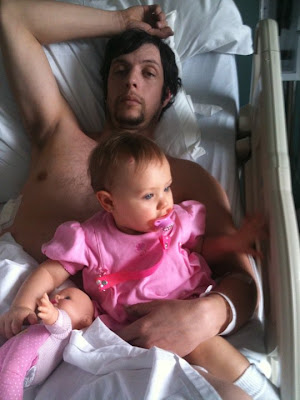 It was a year ago this month when John's lung collapsed for the first time. Now, there has been a second time. We knew there was a 50/50 chance of a reoccurance, but of course we had hoped it wouldn't. John started feeling funny Thurs. but thought maybe he pulled a muscle. By 9 that night he said he was going to the ER. He drove to his mom's and they took him to the ER. Collapsed lung for sure, and even worse this time. So, of course by this time I couldn't very well drive up. So his parents stayed with him until about 1:30 and then had to go home. No where to sleep and he didn't get his own room until 4 in the morning. I got the kids situated and went up Friday morning and stayed almost all day. I came for a couple hours to nurse and then headed back up. The only room available was on the oncology unit, which of course kids under 14 couldn't be in. So, bringing them up was not an option. I stayed as long as I could and left to go home around 10:30. John's mom stayed the night with him. I stayed the night with him Saturday night after I called and got in moved to a new room where the kids could come up. Boy was it frustrating trying to pump/nurse during the hospital stay. I am still trying to catch up and build my supply back up! Saturday night also marked the first time for Klaire to stay the night with anyone other than us. I held up well though. Phyllis brought her up first thing Sunday morning and she spent the rest of the day at the hospital until we got released after they took his two chest tubes out. We were dismissed at 9:30 Sunday night. Whew, what a long weekend (that would have any other time FLOWN BY, lol!) I took off today to help John. He had a great first night at home and a great day today. In a little pain tonight but all in all, doing really well. He goes back tmrw for another chest x-ray. Thank you all for your prayers for us!!