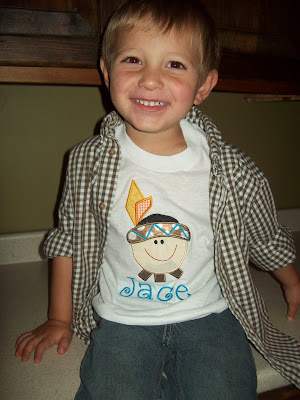 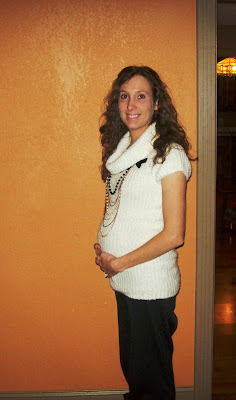 I am halfway through this pregnancy! WHOO HOO! I really believe it is over halfway over since I had both the boys at least 14-17 days early. I would love to have this baby on March 20th. For 2 reasons, one that is my grandpa Martin's b-day. This baby, regardless of gender, will be named after the Martin side so I think that would make it extra special. Also, both the boys were born on the 20th, though different months, both the 20th. Kylan was due Oct. 2 and I had him on Sept. 20th. Jace was due on June 4th and was born on May 20th. I told John when I was pregnant with Jace that I would have him on the 20th and sure enough I did! So....I know that it is highly unlikely that this little one will be born on the 20th, it is a nice thought. Anyway, also Jace just turned 2 1/2 this month. WOW!! Can't believe the little guy is already halfway to 3!! Oh, and oh my looking back at pics from Month 2,3,& 4, I am soooo gaining weight in the face! Curious to see how much I have gained when we go Wednesday. I am only suppose to have gained about 10 lbs. so far and I had already gained 9 of that by my last appt., so I should have only gained 1 lb. in this last month. I am betting on about 8 more though! YIKES!

Wow!! You are so stinkin' cute preggo!! Good luck with everything and I hope its a girl =)